This summer, GreenStage has scheduled more camps than ever before, and in more locations. See the schedule below!

GreenStage’s educational programs support the values of successful learning and include summer shows for ages 5-16. Our theatre camps take each student on a personal journey through the world of Shakespeare. Their natural imaginations will be embraced and nurtured as their ability to focus and work as a team increases. All offerings focus on positive reinforcement and esteem building skills as our young artists explore Shakespeare’s mind-expanding concepts and beautiful world vision. Our instructors create supportive environments in the beauty of the Seattle area parks where we have been staging our professional shows since 1989. Each week-long camp ends with a free performance (picnic recommended) in the parks for family and friends.

Registration for camps at Magnuson Park in North Seattle, Delridge Playfield in West Seattle, and Francis Anderson Center in Edmonds, is done through the individual Community Centers. Registration links will be added below as they become available.

We use creative dramatics, games, and art to bring your child into the imagination of Shakespeare’s world. They will explore several short pieces of his plays and learn about getting into character, figure out how to tell a story as part of a group, learn a few phrases in the original language, and discover the joys of performing. Final short performance for friends and family on Friday at noon.

Youth Theatre Camps – ages 9-16
MUCH ADO ABOUT NOTHING

Trickery abounds! Count Claudio and Hero are in love and getting married. But when the despicable Don John tricks Claudio into thinking that Hero has been unfaithful, Claudio accuses her in front of everyone at the wedding! Meanwhile, Hero’s witty cousin Beatrice and Claudio’s witty friend Benedick (both happily single) are tricked into thinking the other is in love with them. Will Claudio find out the truth about Hero? Will Benedick and Beatrice admit they love each other? Will Don John be brought to justice? We’ll find out as we explore this awesome comedy.

Students will memorize and perform a cutting of this play. Besides working on acting, students will play games while learning to speak and understand Shakespeare’s language. An hour-long performance for friends and family on the last Friday

Youth camps are 5 hours per day, Monday through Friday, with a performance at the normal end time on Friday

Hamlet is on a journey to discover if what the ghost of his father says is true. In the midst of finding this truth a lot of people die. It begins with the death of Hamlet’s father the King, who is killed by the King’s brother, who then marries Hamlet’s mom. Add to that the ghost of his father asks Hamlet for revenge. Hamlet tries to get revenge on his Dad but ends up killing his friend, fiance, and Mom among other people. It is a play full of tragedy, swords, drowning, a play within a play, a gravedigger who makes jokes, and poison. Come play with us and figure out how to portray these complex characters from one of the Bard’s most famous plays!
We will train in some combat with basic swordplay, play some games; and possibly fashion some set pieces. Final performance for friends and family on Friday.

Full Day camps are 7 hours per day, Monday through Friday, with a performance at the normal end time on Friday

Using Shakespeare’s words and stories as a starting point, students will create their own play by twisting famous plotlines and characters into a kind of “Fakespeare”! Students will create this parody together using improv and playwriting techniques to shape their own unique play. Each section will be working on a different plotline. We will take time to fashion some basic set or props depending on what is needed for our improvised creation. Both sections are aiming for 30-45 minute final performances to friends and families on Friday. 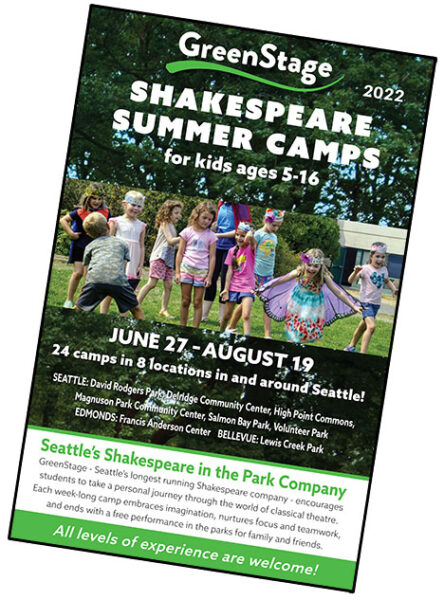 Campers need to bring their own water, snack, and sunscreen. For all day camps, please bring a lunch as well.

Wear closed-toe shoes and clothes that can get dirty, as we are outside in the parks, playing in the grass.

Dress for the weather. Students can bring an umbrella for shade on hot days or in case it rains on cloudy days. Sunscreen and sunglasses when sunny out.

When attending the Friday performance, bring a blanket or chair. In most locations we will be performing on the grass.